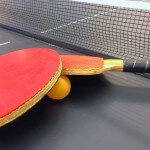 The youth room now has a ping pong table! Thanks to Laurel Whitehouse and the First Church in Belmont, Unitarian Universalist, for the gift. From Wikipedia  History: The game originated in England during the 1880s, where it was played among the upper-class as an after-dinner parlour game. It has been suggested that the game was first developed by British military officers in India or South Africa who brought it back with them.