Bells Across the Land 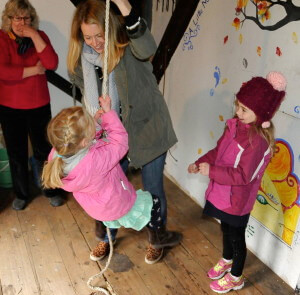 On April 9, 2015, about 40 area residents gathered to ring the Paul Revere bell in the First Parish steeple to commemorate the end of America’s deadliest war. April 9 marked 150 years since the ceremonial end of the Civil War, when Generals Ulysses S. Grant and Robert E. Lee met in Appomattox to agree on terms of surrender.

Rev. Emeritus Ken Sawyer offered brief remarks at the ceremony, which was part of a national event sponsored by the U.S. National Park Service. Called “Bells Across the Land,” the event invited bells across the nation to ring at precisely 3:15pm ET, just after a bell at Appomattox finished tolling.

Before the ringing of the First Parish bell, Rev. Sawyer spoke about Wayland’s role in the Civil War, both the soldiers who went to war and people at home who tried to end it. He quoted from Lois Davis who wrote in the book Wayland A-Z, “About 130 men connected to Wayland served in nearly 30 different regiments of infantry, several artillery batteries and cavalry units and the Navy. . . Twelve soldiers died during the war. . . and twelve were captured.” 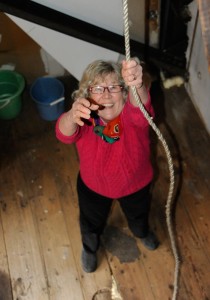 Two Wayland notables are known for their efforts to end slavery, including abolitionist Lydia Maria Child, who lived in Wayland for 25 years and attended First Parish, and the church’s minister during the war, Edmund Hamilton Sears. Rev. Sawyer quoted a Sears sermon from 1856 that said “slavery injects its poison through all the veins of the republic.”

Participants who wanted to ring the historic bell then climbed the winding stairs to the belfry. There, they took turns pulling on the bell’s thick rope, as generations before have done in times of mourning and celebration.